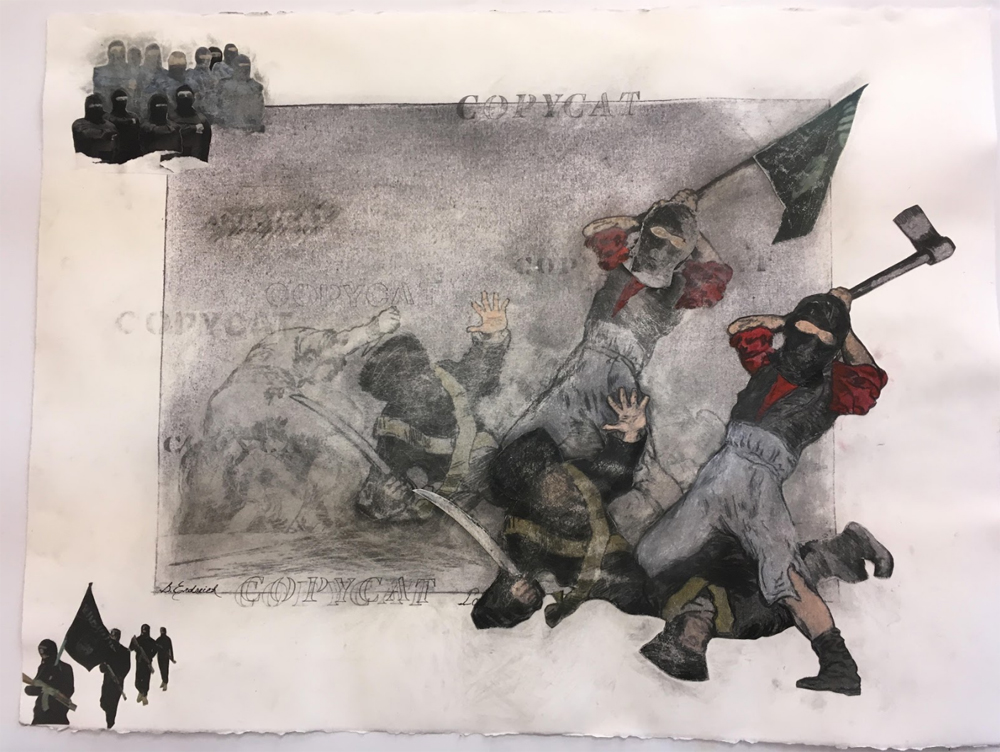 Beverly Erdreich’s Continuum series takes an unflinching look at atrocities that have impacted society through incredible acts of brutality. Inspired by Francisco de Goya’s 19th century series Disasters of War, Erdreich draws direct parallels from Goya’s etchings to modern acts of inhumanity. Reproducing and enlarging a selection of Goya’s images, Erdreich then works into each an additive and subtractive process of drawing, collage, erasure, and text. The images speak to us with an urgency to point out how little the world has changed in the centuries since Goya’s pioneering series of first-hand war reportage.

A native of Dothan, Alabama, Beverly Erdreich earned her degree in art history from Newcomb College in New Orleans, Louisiana. Her work has been exhibited nationwide and is in the permanent collections of the Wiregrass Museum of Art, the Birmingham Museum of Art, as well as private and corporate collections throughout the United States. Erdreich lives and works in Birmingham, Alabama.

Continuum has been shown at Space One Eleven in Birmingham, Alabama; the Montgomery Museum of Fine Arts in Montgomery, Alabama; and the Center for Contemporary Arts in Santa Fe, New Mexico. The exhibition is intended to honor those who have experienced war, violence and acts of hate. Related programming will be presented throughout the run of the exhibition, looking at global events and their effects on local history. The full schedule of events is listed below.

Use the links below to view details about the programs

Continuum Conversation
Continuum Performance
Continuum Film
Continuum Hands-On (Art-Education)
*Continuum Conversations and Films will take place in the Main Gallery
*Public programming for the Continuum exhibition has been organized by an independent Program Manager, Holly Roberts Meyers, alongside WMA staff, and Humanities Advisor Dr. Jeneve Brooks.
*All programs are free and open to the public excluding Operation Art, which is reserved for veterans and active-duty members of the military.