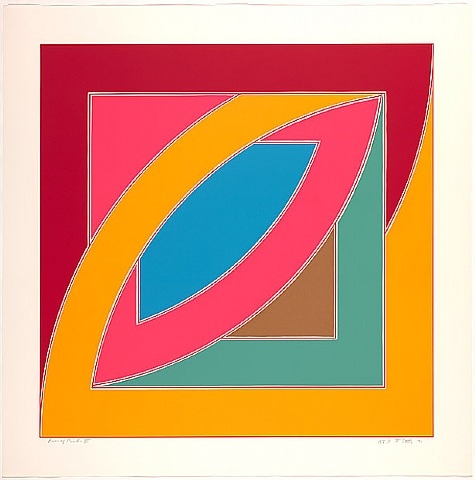 American abstract artist Frank Stella has inspired generations of artists and continues to influence the art world through his constant evolution. One of the most prolific artists of modern times, Stella cemented himself in the art history books early on. Although Stella is revered as a master painter, pioneering the use of shaped canvases, and eventually adding objects into his paintings, the artist has had a successful career as a printmaker as well. Always more concerned with the basic elements of art, he drew an early parallel to his paintings with his first print series in 1967, which focused on color, shape and composition.

Creating some of the most complex work in printmaking history, Stella often experimented with techniques, layering various printing processes. A testament to the advances possible through the arts, Stella’s early work gave him the name ‘Father of Minimalism,’ while later works that utilized multi-colored palettes were the inspiration for movements in post-painterly abstraction and color field painting. As a young artist in the 1960s, Frank Stella inspired generations of artists while his work inspired movements. No matter the medium Stella works in he constantly strives to maintain and reinvigorate the field of abstraction.

Frank Stella: Prints from the Permanent Collection will consist of thirteen works created over the last five decades, spanning the period from 1967 until 1996. WMA holds one of the largest public collections of Frank Stella in the Southeast and this exhibition will outline the artist’s innovations in the medium of printmaking while providing a visual history of the work that has inspired so many others.

Featured Above: Frank Stella, River of Ponds II, from the Newfoundland Series, 1971, Lithograph