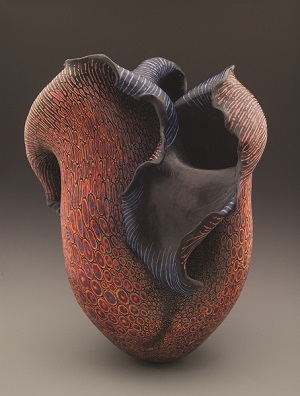 Melanie Ferguson will be exhibiting a retrospective of her work at the museum in a show titled “Inside Chandler’s Cove.” Born in Newport, Oregon, Melanie Ferguson was richly influenced by her ocean surroundings and nourished by assisting, studying, and working with coastal artists and native elders. She is well known for her calligraphic and illustration skills; her early advertising illustrations were widely published in local and national media.

Melanie subsequently focused her interest on the properties of hand blown sheet glass and studied the theory of “painting with light” as she evolved a personal narrative style applied to large-scale architectural and commercial glass commissions. Relocating to Georgia in 2002, Ferguson began study in contemporary ceramics at Roswell Art Center West in 2007, exploring the sculptural quality of hand-built form and the narrative grace of surface, with a special focus on wood and soda atmospheric firing.

Of her work, Ferguson states, “As an artist, I am most interested in that key visual “note” that inspires creative concept by revealing a story to challenge my expression through any given medium, employing the use of elements that demand physical involvement in building form and surface to expose a freedom of spirit as a new story unfolds. Coastal stones rolling ashore, eroding hillsides, the swirling ripple on water’s surface, rhythmic patterns of ocean flora and fauna, shadows cast on water soaked sand, rust, corrosion, and decay each initiates a visual of movement and a concept of renewal that influences each of my sculptural works. Using stoneware and earthenware clays, I hand-build my sculptural forms to preserve this symbolic gesture of energy.”