Today, Indigenous Peoples’ Day, is being honored as communities across the US thoughtfully reexamine our national history, critically question privileged Western narratives, and celebrate the native peoples of North America.

To help mark the occasion and contribute to the national conversation, Cary Norton and I are delighted to guest here on #wmaINSPIRED and share photographs from our ongoing project, Where You Come From is Gone, that were made during an April artist residency at the Wiregrass Museum of Art. The residency was organized as part of WMA’s three-year-long schedule of exhibitions and programs in celebration of Alabama’s bicentennial, officially observed in 2019 with the theme “Sharing Our Stories.”

At this current moment in American life, the act of remembering is political and has great power.  What we choose to remember, and how we remember it, shapes our national identity. Where You Come From is Gone explores the importance of place, the passage of time, and the political dimensions of remembrance through the 19th-century wet-plate collodion photographic process. The project seeks to make known a history that has largely been eliminated and to make visible the erasure that occurred in the American South between Hernando DeSoto’s first exploitation of native peoples in the 16th century and Andrew Jackson’s Indian Removal Act 300 years later.

Using a 100-year-old field camera and a custom, portable darkroom tailored to my SUV, Cary and I have journeyed more than 3,000 miles across 30 Alabama counties to document indigenous sites through the antique process. The project has taken us up and down our state’s highways and across backroads and dirt roads, atop mountains, through fields and over rivers, and most recently into the beautiful Wiregrass. Over the course of the 3-day residency at the WMA, Cary and I visited each of the nine counties that make up the region. From the state’s Florida border to the bluffs of Eufaula, we encountered a beautiful and storied landscape.

Cary and I are grateful to the Wiregrass Museum of Art, the Alabama State Council on the Arts, and the Alabama Bicentennial Commission for the generous support of our work, especially during this important time in our state and national history. To see more images and learn more about Where You Come From is Gone, visit gusdugger.com. 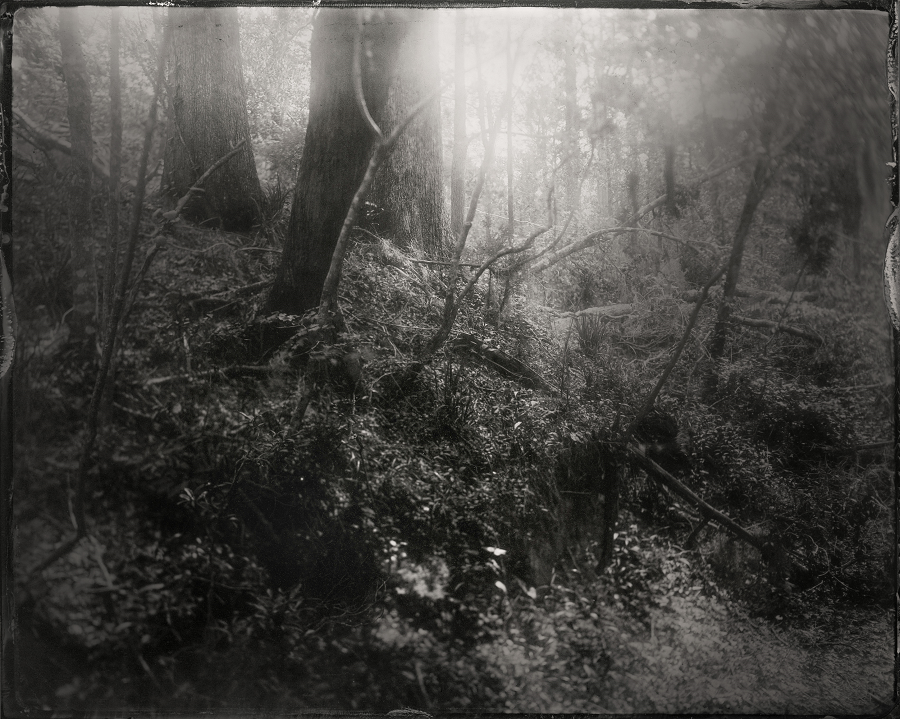 Our first stop was to the Omussee Creek Mound, located just outside of Dothan. The mound was built by the Chacato people, ancestors of the Creek Nation, who between 1550-1700 held a tenuous relationship with Spanish missionaries but were ultimately forced from their customs and lands by European colonists. The Omussee Creek Mound is the southernmost platform mound along the Chattahoochee River, occupied approximately 1300 to 1550 A.D. as part of an important Native American settlement. This region of southeastern Alabama and southwestern Georgia – including the Wiregrass – was once home to one of the densest concentrations of mound centers in North America and served as a key population and cultural center during the Mississippian era (ca. 1000-1600 A.D.). By around 1550, the native population in the area was in decline. Many believe this may have been part of a broader, regional depopulation due in large part to the spread of diseases brought by European explorers.1 Today the mound is difficult to distinguish from the short knolls and hillocks along the banks of the Chattahoochee, and it is covered in trees and dense foliage – much of which had been felled and further tangled during Hurricane Michael. 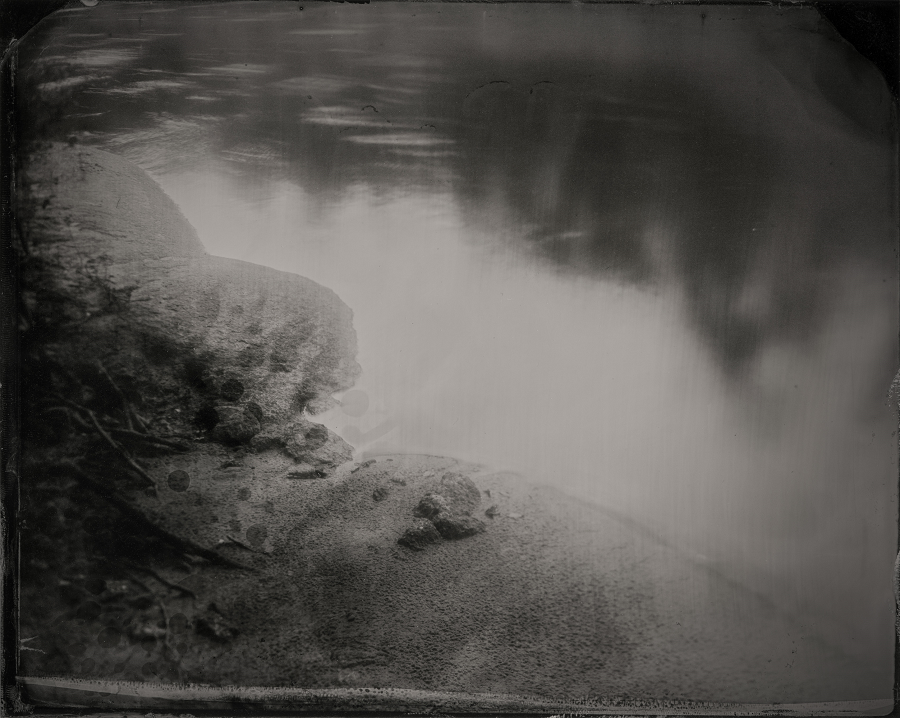 Following some big storms that began day 2, Cary and I made our way to Geneva County, where a Native American town site is located one mile below Pate’s Landing on the Choctawhatchee River. It’s near this point in the river that the Muskogee Creek would navigate large sea-going trade canoes that traversed the Gulf Coast.  Making this photograph was quite tricky. To access the river, we had to drive several hundred yards off-road, scramble down a steep embankment to set up the camera, and then make a timed exposure of several minutes. Once the single exposure was made, Cary and I would climb back up the embankment to the truck so we could develop the picture in our mobile darkroom – all of which must be done quickly before the plate dried and became inert. 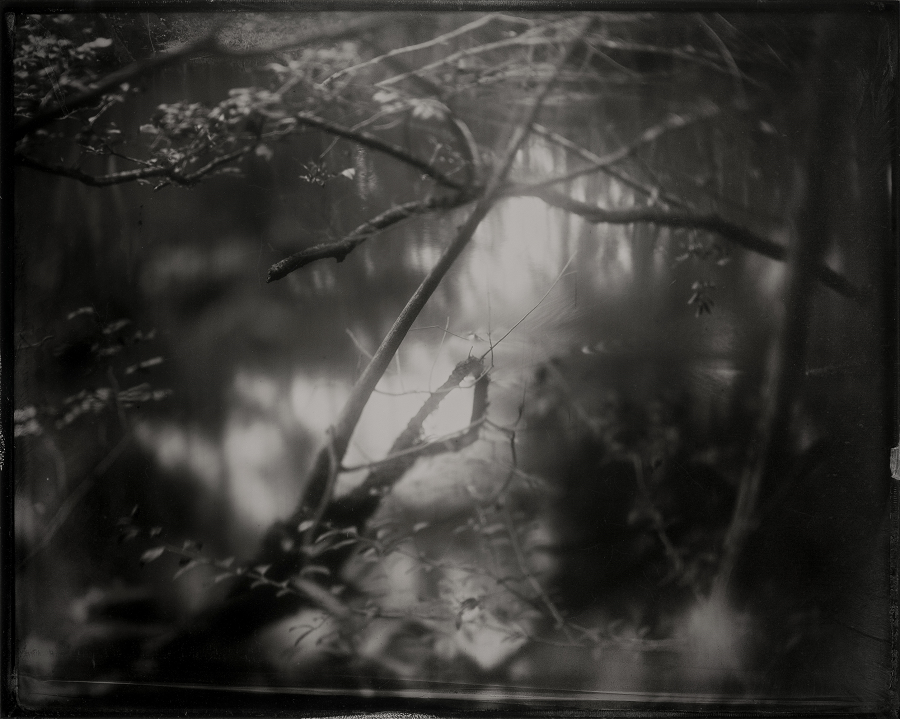 On day 3, Cary and I ventured into Pike County to find the Pea River, site of one of the final battles of the Second Creek War. As native peoples were forced from their homeland in the early 1800’s, many resisted removal. As treaties guaranteeing native land rights went unenforced and settlers moved into Creek territory, many Creeks fought back against the violent appropriation of their land. Others chose to move south instead of west and traveled to Florida, following a route along the Pea River. In March of 1836, Alabama Militia forces, led by U.S. General William Wellborn, tracked 400 Creeks to their camp near Hodby’s Bridge and attacked. It is said that much of the fighting occurred in waist-high water and deep mud, with Creek women and children taking up arms alongside Creek warriors who used bullets made from melted pewter plates. At least 50 Creek men were killed, with an unknown number captured. According to some reports, some of the captured Creeks were enslaved by local planters.

About Jared Ragland and Cary Norton: