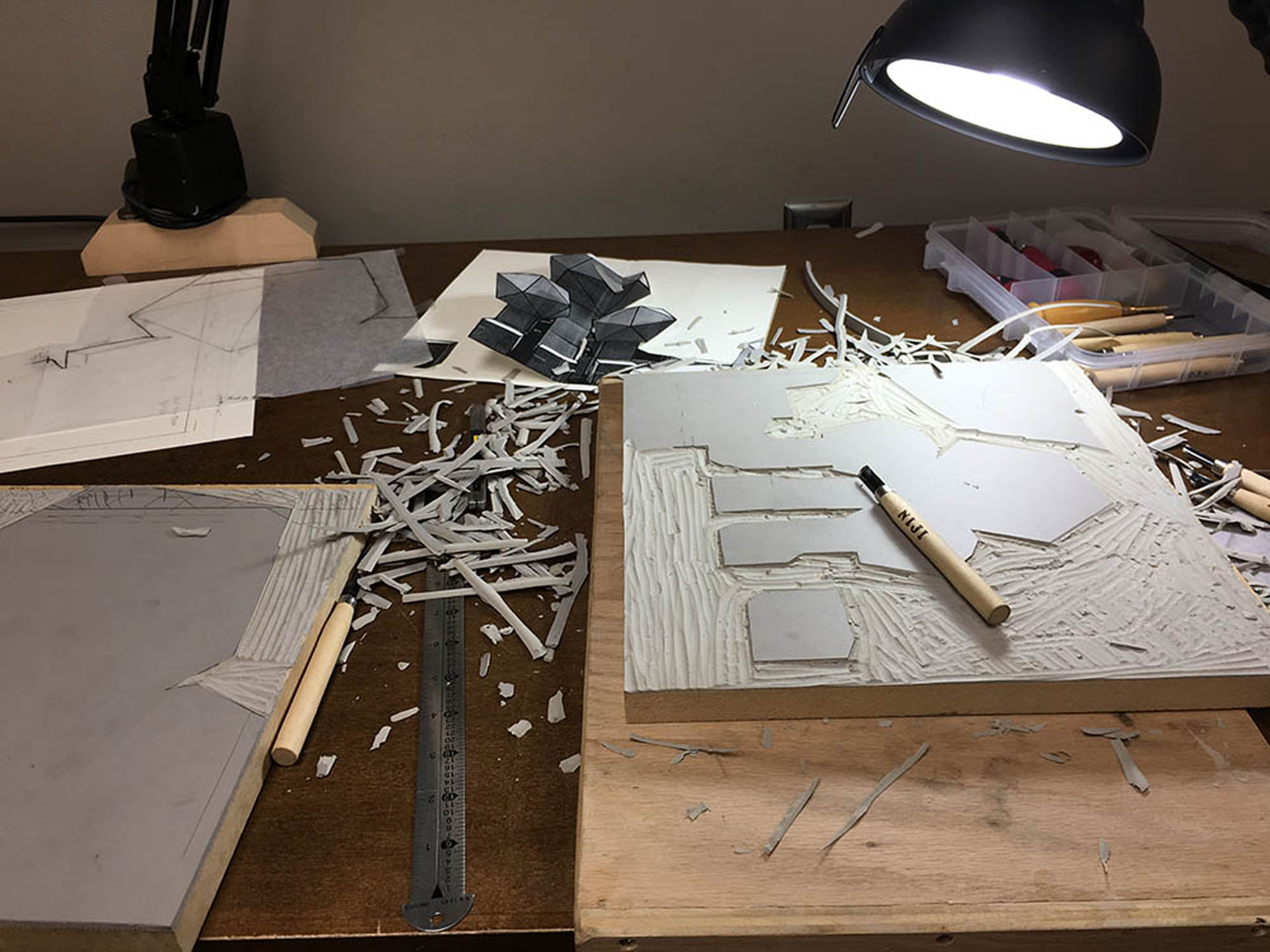 B20 Artist Interview with Sarah Bryant

We’ll be sharing a series of interviews with B20 artists during the run of the exhibition, and our seventh is from Tuscaloosa, Alabama-based artist Sarah Bryant. 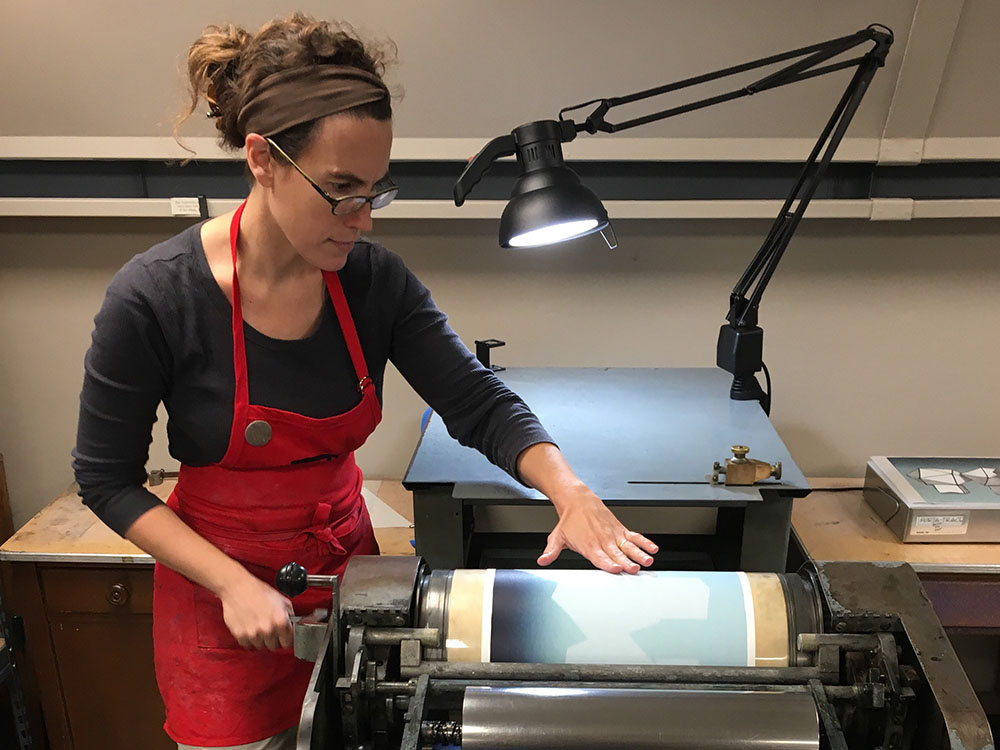 Where do you find inspiration for your artistic practice?
I find it in different places for every book. My books each take about two years to complete, and they are all very different projects. In the past I have made books about mapping population data, personal collecting habits, and about the chemical composition of the human body. I usually start by taking note of the kinds of things that grab my attention, perhaps taking photographs or notes when things strike me. As a pattern begins to emerge, I begin making book sketches and mockups and/or making prints. I have to make and discard quite a bit before I get on the right track. Some ideas are not suited for a book. The concept may be too broad, or not complicated enough. Often the process is additive; I have a kernel of something I’m interested in and I spend a long time looking for its complement.

As an artist who creates books, would you also describe yourself as an avid reader? What genres do you frequent, and how does reading inform your creative process?
I used to be an avid reader, but now I have a four year old and that has limited my ability to read! However, I certainly read deeply around any subject that I find myself zeroing in on for book projects. For The Radiant Republic,  the book which is included in the exhibition, I read a lot about architecture, revisited Plato, and read the work of Les Corbusier. I also spent time talking to people with expertise in those areas. Because I am often making work about subjects that I am having to learn a lot about, I want to make sure that I am speaking to people who can alert me if I am going in the wrong direction or oversimplifying. So I read, I make, I take what I have made to people who know more than I do, (in this case philosophy and architecture professors, and other makers to help me work out the kinks in production) then I read and make some more.

Are there current trends in community and city planning that inspired you to create The Radiant Republic?
I started working on this project after the 2016 election. At the time I was thinking about how vulnerable the idea of “truth” had become, and about the concept of The Ideal. I started with platonic solids—objects which frequently offered as examples of perfection of form. There are so many templates out there for creating these solids, but you cannot make a perfect object. This led me to Plato (who wrote about the solids in his Timaeus dialogue in 360 BCE.), which led me to the idea of the city, which led me to architecture (and a wonderful book called On Weathering) and Les Corbusier. What interested me about Plato and Les Corbusier were the unexpected similarities between Plato’s Republic and Les Corbusier’s Radiant City. Both of these men used the city to speak about their beliefs on ethics and morality. Both texts design a city from the ground up. And both use their language choices to force their point of view. For example: Plato uses the Socratic Method, a fictional Q and A which gives the illusion that an idea is being challenged when in fact both sides are written by the same individual. There are also a lot of aggressively posed questions: “do you not agree that. . . “ “Is it not right that. . . “ Les Corbusier uses ALL CAPS and BOLD DECLARATIONS to beat the reader into submission. His typographic choices are so loud! Additionally, It is no surprise that both of the texts are overwhelmingly male, written for men by men. They were not written for me and I can feel my exclusion when I read them. So I manipulated them, excerpted language, and put that language together to create my own narrative about city building and city destroying. The language works so well together that sometimes I am not sure when I read it again which man wrote a particular phrase or sentence.

Is it common for you to use existing texts when creating your artist books?
I do not always use existing texts, but I usually make use of some kind of source material. In past projects this source material has taken the form of reference texts, global population data from the US State Department, the periodic table, the index of an anatomical atlas, and an archive of newspaper reporting about a construction project. I see my role as deepening or questioning the source material in some way to complicate the subject matter. I also occasionally use that source material to speak about something else entirely.

How does living and working in the South impact your work?
I learned my skills of bookbinding, printing, and papermaking in the South. I’m a Delawarian by birth but I moved to Tuscaloosa in the early 2000s as a graduate student. I left the South and moved around quite a bit, but now I find myself in Alabama again, teaching in the same place where I learned these skills. The honest answer is that I don’t know exactly how living in the South impacts my work, but it certainly impacts my life. There are times that I love living in Alabama and times that I find it very challenging. But it feels right to be back here working with students and sharing my commitment to this work.

Is there anything new you are working on that you’d like to share with us?
I’m in the middle of a project about sample books. In March I had to shelve the project when I lost access to the press, but I am still working on mockups and drafts in hopes of printing the book in the early spring.

A little bit about that book: In the early 20th century, American textile mills, designers, milliners, and retailers united to produce color cards—or textile sample books– in an attempt to codify the identification and communication of color values (and wrest control of taste-making away from Paris.) Like all manufactured objects, color and textile sample cards were made in response to shifting technologies, economic factors, and complex national agendas. Color forecasting, the issuing of color cards in advance of a season, was an early form of planned obsolescence, and is still a major engine in the global economy. These color cards and sample books are part of our origin story as a landfill culture. I took a trip to Yale last fall to look at boxes of examples of color cards and sample books, and I am working on a project that touches on all of this. It doesn’t make sense yet! But I am trying to bring it into focus.