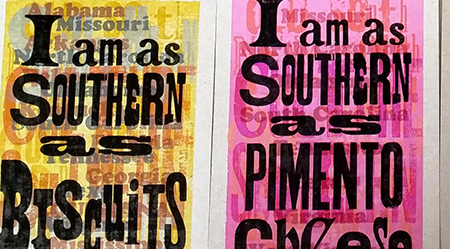 Southern As by Amos Kennedy

Southern As exhibits the prints of famed letterpress printer Amos Kennedy, whose notable work deals primarily with culture, politics, and race. In Southern As, Kennedy’s work is colorful and culturally significant. The exhibit is comprised of small, chip-board prints emblazoned with statements that connect both the artist and viewer in their “southerness.” Kennedy’s work is comfortable and familiar, which allows the viewer to connect with the pieces individually and make their own meaning.

Kennedy, who is adamant that he “is a printer, not an artist,” worked for over 20 years in the computer programming industry. In 1989, on a visit to Colonial Williamsburg with his family, he saw a printing press demonstration. Within three months of the trip, he was printing his own work. Kennedy then enrolled at the University of Wisconsin-Madison and earned an MFA in 1997. Kennedy has lived and worked in numerous small towns in Alabama, but currently resides and produces in Detroit, Michigan.

Southern As will be on view in the Coleman Gallery from Wednesday, June 1st through Saturday, September 24th.

This exhibition has been made possible by a grant from the Daniel Foundation of Alabama.