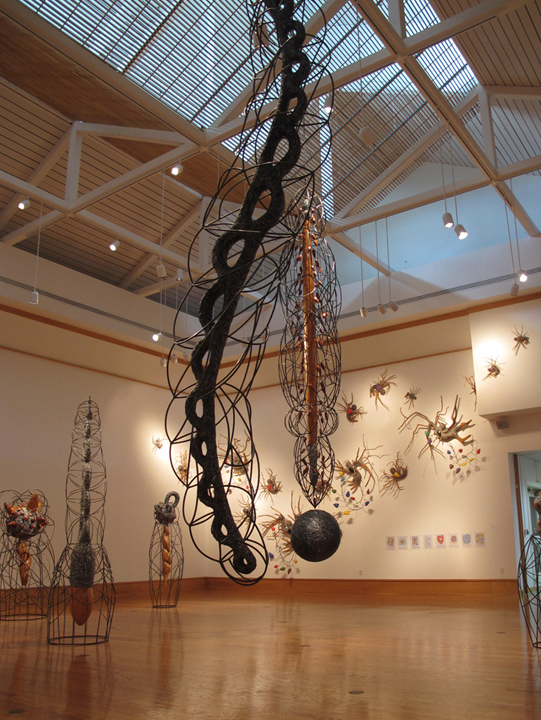 Duane Paxson has an abiding appreciation for the mysteries and rhythms of nature. To this proclivity for the outside world, he marries an equally expansive knowledge of tradition, symbolism and number. His most recent work reveals an assessment of social interaction and the human condition in which Paxson delves with wit and infectious humor into the perennial problem of evil, creating monumental hanging sculptures, which prod the viewer to a good-humored meditation. The engaging visual drama of the welded steel and fiberglass configurations serves only to enhance the artist’s sober ponderings.

Surrounded by a secure metal “screen” of graduated, looping patterns, Ivory Tower (2011) represents the abstracted “thinker,” whose role is to generate ideas through lofty contemplation. Memorial to a Slug (2012) probes human cruelty, the source of guilt. A slender cedar pendant encircled by a network of steel rods at once regular in outline and whimsical in pattern, the work pays homage to those gastropod mollusks, which kids torture, setting them on fire with a magnifying glass. Spinal Heretic (2012) further illustrates ruthlessness. Patterned after a human spine, the work bends, mimicking the physical devastation wielded by medieval instruments of torture.

The works from Paxson’s Witch Hunt (2014) series commemorate the women tortured and hanged during the Salem witch trials in 1692. Graceful in configuration, the works reflect feminine beauty, but areas of twisted and mangled steel stand for flowing hair, conveying the inner tumult of the victims. Paxson thus explores humankind’s most vexing problem, that of evil. But he does so with visual panache and engaging humor. Paxson serves as Adjunct Instructor of Visual Arts at Troy University. His work has been reviewed in Sculpture, World Sculpture News, Creative Quarterly and Art Papers. He has received numerous awards including 18 merit and purchase awards as well as an artist fellowship from the Alabama State Council on the Arts. He received his BS from Troy State University, Troy, Alabama and an MFA from the University of Alabama, Tuscaloosa.